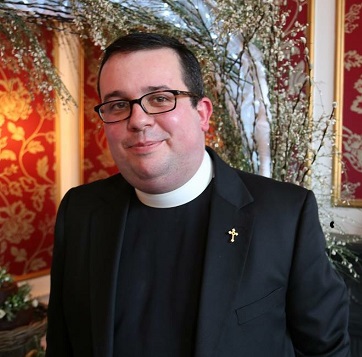 Father Philip was born in Sunderland in the North East of England. At a young age he travelled to Asia with his parents due to his father's job. He was confirmed in the Nippon Sei Ko Kai (the Anglican Church in Japan). Returning to England to go to school in Durham, he then studied theology at St Andrews University. He did his postgraduate work at Yale University and Keble College, Oxford. His academic interests include church history and liturgy.

He trained for the priesthood at the College of the Resurrection Mirfield before serving as a curate at Worksop Priory. He then returned to Oxford as Chaplain of Pusey House. For the last five and a half years he has been Vicar of St Stephen's Lewisham in the Diocese of Southwark. In his spare time Father Philip enjoys reading, cooking (he has an awful lot of cookery books), going to the theatre and walking in the Lake District. He loves travel and pilgrimage especially to Italy and the Holy Land.

He is a priest of the Society of the Holy Cross (SSC), a Priest Associate at Walsingham, as well as editing the magazine New Directions for Forward in Faith.