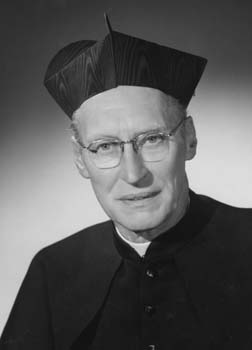 How I Came to All Saints'

My first contact, as it were, with All Saints', apart from having preached a course of Sermons there in Lent 1925, was when I was away on holiday in Somerset in 1931.

I saw the announcement of Fr. Ridley's death in the paper on September 3rd; and I well remember saying to my Mother, "I wonder who will go to All Saints'''! The next thing that happened was a telephone call from Prebendary Leary in October. He had been Vicar of All Saints' from 1896 - 1907, and was then Secretary of the Society for the Maintenance of the Faith, the Patrons of the Living, saying that he had had a nomination form for me, and would I accept it if it were offered to me. I said that I knew little about the place and could not well answer the question until I knew more about it. "Then," he said firmly, "you must find out, for out of over thirty nominations that have been received, I think that you are the man for the job"! I had a great respect and admiration for Fr. Leary ; and I said that if that were really the case, I would do what he asked. I came and interviewed the then Churchwardens, Mr. Ostler and Mr. Parker; and ultimately, with some trepidation and hesitation, I allowed my name to go forward, without the slightest thought that the Living would really be offered to me.

The next thing, a few weeks later, was a telephone call from Fr. Leary, saying, "I think I can promise you that you will be the next Vicar of All Saints'," to which I replied" Oh, what fun! " " Not at all," he said, " the place is bristling with difficulties." At any rate, in due course the Incumbency was offered to me and I accepted it, difficulties and all!

I was fortunate enough to find two excellent Priests there as Assistants, Fr. R. S. Hordern and Fr. J. B. C. Maxwell, who had both wanted me to come, and who saw me through that first difficult period......

Copies of Thirty Years at All Saints' Notting Hill London W11 can be obtained from All Saints Church Notting Hill. A donation of £:5.00 +pp would be appreciated